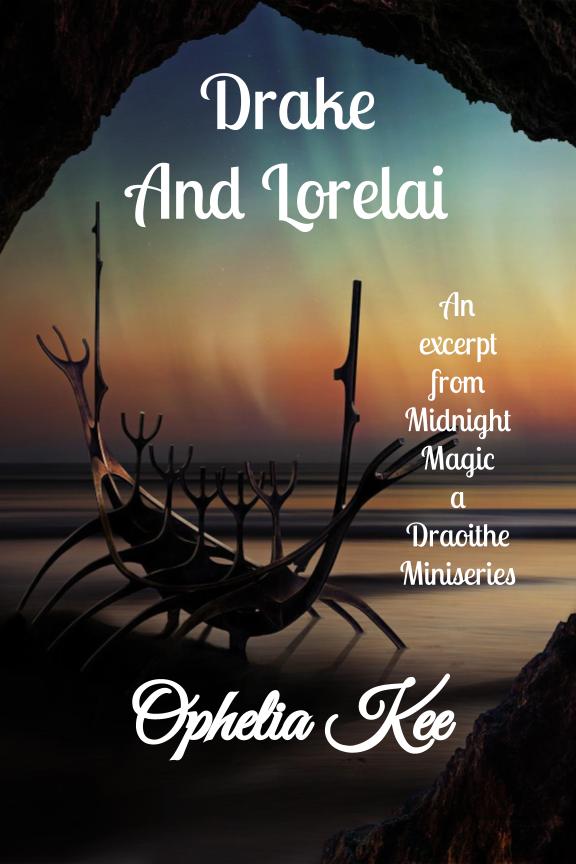 an Excerpt Tale from Midnight Magic

The wizard slept. The man was haggard and worn, beaten senseless. He fought a seemingly never-ending battle that wasn’t his to fight. He had no choice. There was no one else to fight it.

Drake couldn’t take Leiriu’s magic without a king to swear his oath and the well that was Lorelai. One wizard was alone, against an evil that not even the dream could contain.

Drake could raise the sword and give Dross time to speak the magic words. They both knew that at some point, Drake’s sword arm would falter.

Rothstein had brought Drake back, crafted a dragon from midnight magic, and asked that he serve in exchange for one more chance to love Lorelai. For that, Drake would be forever in the man’s debt.

Drake understood loyalty. Lorelai had taught it to him.

He was a dragon with immense power and magic, which meant nothing compared to his love for her. They’d both been warriors in a previous life. They were still that way.

She was a shield maiden, and a warrior's life destined him for Valhalla his whole life. He’d wasted his chance to be one with the only woman who ever turned his head. Looking back, he could see what he’d always been blind to then.

Dying in that last battle they’d fought as humans had left him with no chance to offer his love to her. He’d been a fool.

It was funny how a man could go into battle with a sword and kill other men without the pain of conscience, yet never work up his nerve to speak with a woman who could reject him outright.

When he stood before Dross as a dragon, he had no issue swearing fealty. He had no problem picking up a sword and following a man chased by a devil. That had been the easier part. He liked to fight.

When Dross asked what he’d need in exchange, Drake had asked only for his Lorelai to be returned as a dragon, too. The one he’d always wanted as his own had been called back to serve with him.

Dross needed Drake for personal protection. Dross wanted Lorelai to protect a wisdom, the one woman that the wizard needed more than anything. It made a weird sense. The best of the legendary Norse fighters returned to guard the two people in the dream who were seeking to stop the chaos.

Dross had waited while Drake and Lorelai spoke long ago. The wizard had been a silent witness to Drake’s need for Lorelai to accept him. He knew he only had one chance.

His fists and his sword usually spoke for him. For the first time, his words hadn’t failed him.

“You’re again as beautiful as you were before.” His hand ghosted her cheek.

“I should’ve told you then. My fear owned me. I’ve never been worthy of a woman as strong as Lorelai Teragon.”

He grabbed her hand and made her look at him when she would turn away. He needed to see it when she refused him, so he’d know he’d been right all along.

The words she spoke shocked him. They made his heart ache. They were the truth, but not the truth he’d expected.

“You were a fool, Drake Lesarde. There was none for me but you. I remained a shield maiden only to fight beside you. You were a single-minded warrior with never a look away from the fight. Nothing changed your focus. Not women, riches, or wine. I refused to be a distraction for you. I wanted only to walk into Valhalla beside you.”

Lorelai looked away. Drake had frozen for a moment once more, losing his words.

“Fight beside me again. This time I won’t be a fool,” he whispered, finally taking the chance that she would agree.

She looked up at him. He looked at Dross.

The man had honor and courage. He was trying to save someone else from a problem that was only his by chance. He’d given Drake an eternity to make his mistake right with Lorelai. The price was insignificant. The two of them could be midnight magic forever.

“I’ll fight beside you again. Nothing else would ever be good enough.”

She grinned. It was the same grin she always smiled before the battle began. She’d followed him to destruction before, and her love still rang true enough to do it again. This time, he hoped it would be glorious.

They turned to Droskyn Rothstein, the First Wizard, and swore oaths of fealty and protection to him and Emily Erskine. Dross carried an injured oracle as they leaped through the dream to a ruined smoking castle and heartache.

They stayed with him as he learned the extent of his loss. There was nothing left of his home but a burned-out castle and the remnant of a tower.

A lesser man would have been inexorably broken. Drake thought for sure that the destruction would have destroyed him. The wizard survived more determinedly than before. Dross was eerily like him.

The man lived only for his love.

Emily was what held Droskyn Rothstein together. She owned both the heart and soul of the wizard. Drake understood that. Lorelai had always owned him.

Drake shook the memories of his past life away with a yawn. He drove on until he couldn’t. Then he slept.

He got food when he woke and continued the drive.

They stopped only for gas after they left Leiriu boxed up in the desert. Dross hadn't found a way to end the devil yet.

The battle took its toll. Dross was feverish and talked in his sleep. Drake knew the wizard would live. He had seen him that far gone before. It pained him that his friend suffered. He was still surprised after long centuries to think of Rothstein as his friend. It was true.

The man called out to Emily in his hallucinations, and it nearly broke Drake as it had so many times before. His own heart echoed that sentiment for his Lorelai.

The man was a warrior through and through. So many times the two of them had fought back to back against the evils that Leiriu set upon them. He often had to remind the wizard to use his magic.

Dross always picked up his sword first. Once a warrior, always that. It reminded him of the way Lorelai had always been and made him smile a melancholy smile...

Thank you for reading this first episode of Drake and Lorelai by Ophelia Kee. If you are enjoying this tale, please be kind and leave a comment to let an old tiger know your thoughts.