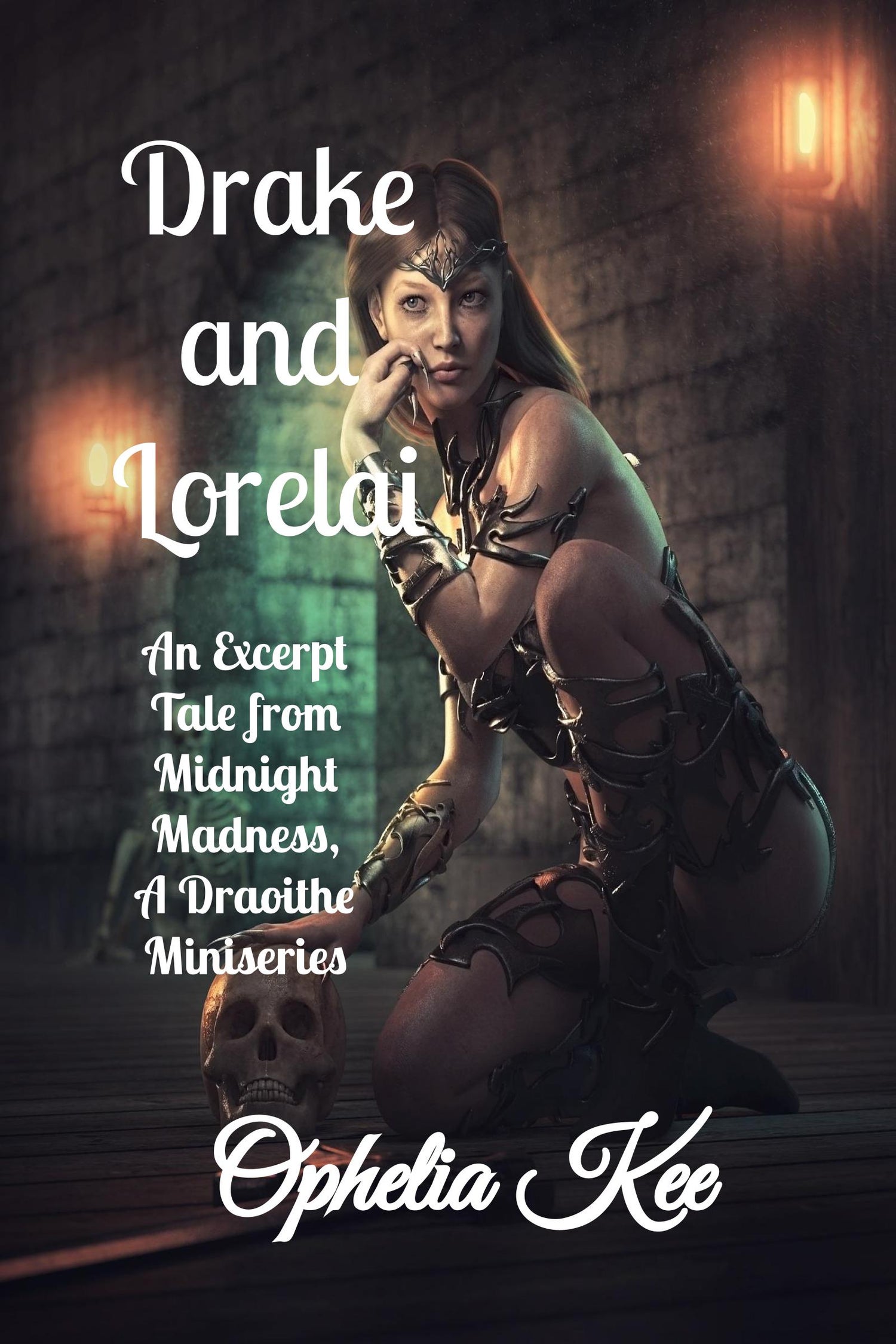 an Excerpt Tale from

Emily was anxious. She stayed quiet the entire train ride to the gateway. King Leas had handed the paperwork to Emily personally. The lan damh was a good man.

They passed through the portal, and the unicorns held them up, reading through everything. An archangel and a white dragon princess had crossed over illegally recently, and none of the unicorns wanted to face Meid Breach for any more lapses.

They followed the gateway guardians to another portal after everything cleared. They emerged from a cave outside of Dallas. Sergio Luce met them with vehicles and a man he introduced as Marchand D’Aragon.

Emily was glad to see the stag prince. The gryphon ambassador practically radiated controlled power. If the others at Draoithe were like the men with him, then they had a real chance.

Lorelai shook hands with the men. Then, she saw a strange thing indeed.

A red dragon knelt before her, recognizing her as the queen of dragons that Drake had named her so long ago. He was dark and edgy, like a warrior of old. When he stood up, she was half a foot shorter than he was. The Viking warrior before her made her long for Drake.

Marchand introduced him as Eldur. He was Norse, as she and Drake were. Blonde hair and piercing blue eyes held pain and remorse, but also great strength and resolve. The black shadow of the assassin hung in his aura. He was lethally dangerous.

Lorelai liked him instantly. He felt like a kindred soul. The Norseman was like the warriors of old to her. He would do. She extended her arm to clasp forearms with him as she always had with the other warriors. He looked surprised at the gesture, but accepted the offer.

“My lady, Emily, will need our protection, Eldur. I don’t trust these elves as the lan damh do. She’s the only wisdom. She seeks her mate here. It’s my responsibility to see to her safety. I’m oath-bound to ensure that she has an opportunity. My warrior will be with her mate. Now that she’s here, I believe that her man will come for her.” She spoke to the red dragon in old Norse.

Eldur grinned in understanding when she nodded.

“If she seeks her mate, she has arrived in the right place. The magic seeks balance at Draoithe. If he lives, he’ll seek to find her there.” He paused, thinking. His words formed slowly, as if he was long out of practice.

“You speak the old language. It’s been centuries since I heard my tongue spoken outside of my mind. How is it you’re a dragon?”

Eldur asked as he pointed to a couple of men directing them to the distribution of the people in the vans.

“Same as you. A necromancer called me to serve. A better question is how you became a death dealer. The Norse don’t believe assassination to be an honorable profession. But you have great honor.” Lorelai studied the red dragon.

“It’s a long tale deserving of several pints. You’re right. It’s strange to be what I am. You will be among the few as a female dragon, Lorelai. The dragons of the Leaindeail are all men,” Eldur spoke quietly, noting her strangeness.

Lorelai chuckled as she watched Emily staring wide-eyed as they passed through the countryside. Her friend spoke old Norse fluently. She understood every word.

“Eldur, I’m usually among the few. Shield maidens are always alone among women. We think like warriors rather than hearth women. I’ll be fine among the men. Tell me about the security at Draoithe.”

Eldur raised a brow, then nodded. He explained the wards and the gargoyles. He answered her questions about the dragons that served at Draoithe and explained the mix of magics in those that called it home.

By the time they drove past the gates and the sentinel gargoyle, Lorelai was properly educated about how the Druid pack operated. Emily had all of her questions answered, and she hadn’t needed to speak.

They were shown to rooms upstairs just before ten-thirty in a mansion of an alpine ski lodge style building. She had rooms next to Emily.

She’d been surprised at how opulent and grandiose the house had seemed while being full of the feeling a castle with a family always had about it. Home and hearth. Not just a building.

The magic felt good. Rooms upstairs had shocked her. Eldur explained that the dragons of Draoithe were free, and like her, they had willingly chosen to serve. Luke and Eli made it a point to see most of the dragons housed upstairs on purpose.

Lorelai asked Eldur about weapons practices, and he told her about sword practice in the mornings. He offered to practice with the staff if she needed it at the moment. She glanced at Emily, who nodded. Emily needed to rest.

Lorelai could use a good unwind after the long trip. Seeing Eldur and speaking with the male dragon made her itch to see Drake. That energy needed an outlet before she could relax.

She followed the red dragon assassin down the stairs. Emily was safe at Draoithe, as she had been in the Lan Damhan.

Lorelai could use a good sparring partner. Staves were just as good as the sword. Eldur opened the closet next to the doors to the patio. He handed her a staff and took one himself.

A vampire teleported into the space dressed in only joggers just before eleven. He was thin and beautiful as vampire men always were. The man smiled at Lorelai, took a staff, then moved faster than anyone she’d ever met. He was on the patio before the door could close. Lorelai blinked.

“That was the Ruiri Andrei. He’s the fastest vampire alive. Good man. He always practices at this hour. The grey dragon Blaze will probably join us. Don’t challenge these men before you see them practice. They’re all very good. The grey dragons don’t divide their time between the sword and the spear. The staff is their only weapon. They don’t handle iron,” Eldur remarked.

Lorelai idly wondered why that was, but decided she needed the practice more than she needed that question answered. Thoughts of Drake wielding a sword long ago rose in her memory. How she longed to see that once again.

They followed the vampire out to the patio. She slipped off her shoes. Eldur did the same. She could fight with shoes, but it always felt better to feel the land with her feet when she practiced with the staff.

That connection to the dream was good. Even as a human long ago, she’d always preferred to feel the ground beneath her feet.

Wood was warm and tied to the land it came from. Rooting oneself in the natural world was always the best place to be mentally during a fight.

It was nice to practice on a true night as well. The half-light grey of the Ainglean left one longing for a good dark. The stars overhead twinkled in the distant, cold black of space. That felt good.

The ulfheonar and the berserkers had always chosen to go into battle without even clothes, so they could be one with the wild world and pull strength from nature. Some may even have become the animals they were named after, shifting back and forth from man to animal, confusing their enemies.

Lorelai wasn’t sure, but she was a dragon shifter. Perhaps there was more to the old stories than just words and wind.

Thank you for reading this episode of Drake and Lorelai by Ophelia Kee. If you are enjoying this tale, please be kind and leave a comment to let an old tiger know your thoughts.