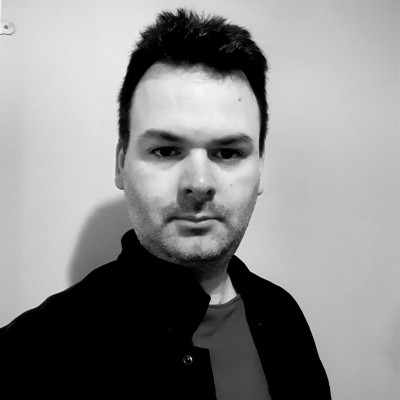 Adam Matlow is an indie author, with delusions of grandeur. He's currently working the follow up to his first novel, "Dark Sentinel".

He lives in England with his wife, two boys and multiple cats and works full time as a software developer. When he's not busy breaking code, or tripping over cats, he likes to visit the archery range, where he misses targets with surprising consistency. And after all that, if he has any time left at all, he likes to spend it sobbing over a keyboard, trying to write.

Hello everyone! I'm happy to announce that my latest work - "Fractured" has been released and can currently be found on the Amazon and Google Play Books stores.

It's a sci-fi novella (approx 50k words) and was something that I wanted to write as an exercise in certain aspects of writing that I felt I needed to improve on - for example, character development.

The story is about a sixteen year old named Brin - who has lived his entire life in the only city he has ever known - "Arcadia".  The city is completely surrounded by an impassible wall, and the "Overseers" - the city's self-proclaimed protectors and lawmakers, make sure that nobody can ever leave.

Something in Brin make him want to try.

I'm still working on the follow up to my first book - "Dark Sentinel" and hope to have more news on that soon.

#sci-fi
#novella
#release
#book
Ever wondered what aliens who have never heard music before might think when they hear it?
By Adam Matlow - 26 April 2021

Ever wondered what aliens who have never heard music before might think when they hear it?

The below is an irreverent look at what might happen, written in response to a writing prompt a couple of years ago....

Greemax, the blue-skinned eight-foot tall lizard and leader of the Grand Galactic council stood as the human representative was led into the council chambers. Seated in a large circle around them were the delegates from the affected worlds, who watched anxiously as the human took his position in the centre of the chamber, ready to be questioned.

Greemax spoke in a collection of whistles and clicks, which were automatically translated into a language understood by the listeners via an earpiece that everyone in the room was fitted with.

The human cleared his throat. “Esteemed representatives of the Galactic Council, I have come as requested. How can the people of the Earth be of assistance to you?”

Greemax sneered at the tiny man below. “Quite frankly ambassador, we want you to shut the hell up.”

There was a mummer of agreement from the other delegates.

The human shuffled uneasily and loosened his tie.

“I know you’re new to the neighborhood, but we have rules about how noisy a planet can be. Your radio emissions are extremely annoying.”

“Yes, so if you wouldn’t mind turning it down a bit, then we might all be able to get some peace.”

“Last month, when you had the Illrixie over? You were pumping out noise for a whole week. The Wulu people of Alpha-Centauri couldn’t get a wink of sleep.”

The human cocked his head. “I don’t see how that’s possible, considering they are four light-years away. They couldn’t have heard it yet? Even so, it wasn’t that loud.”

“Well they could hear it, and because of that they are now a nation of insomniacs.”

“But the Wulu sleep thirty-seven hours a day? Sleeping is their defining feature.”

“Exactly, and now because of your racket, none of them can sleep. Do you know how annoying it is having to deal with three billion cranky Wulu’s?”

“Yes, well we do. It’s going to take months to get them all back into bed now. And that’s just the tip of the iceberg.”

“I’m sorry your grace, is there another problem?”

“Yes, and it has to do with this thing you call music.”

The human tilted his head. “You’ve never heard of music?”

“It is not a concept we have come across before. However you Humans seem obsessed by it. Do you know how dangerous it is?”

“Well for example, last week something called Radiohead washed over the home planet of the Piraxa and now half the population refuses to leave the house. They just mope about and talk about nothing but the bleakness of existence.”

“But aren’t the Piraxa renowned for—”

“Being the biggest party animals in the known universe? Well, not anymore and quite frankly they’re starting to get everyone else down.”

“Well, I don’t see how we could have possibly known our music would have that effect. But I’m sure it’s not that bad?”

Greemax glared at the human. “Tell me, have you ever met the Urturk?”

The human beamed. “Yes, why only last week we had their ambassador over for lunch. It was very enlightening – we’ve never met a four-headed race before. It’s such a shame he was allergic to the table flowers. There weren’t enough tissues in the building to deal with the aftermath of his sneezing fit.”

“Well I doubt you’ll be welcome on their planet anymore. You see, not long ago they heard something called Rock and now the whole planet has concussion.”

“Can you imagine the mess when eight billion people, all with four heads, all start head-banging? It’ll take us weeks to sort that mess out.”

“And don’t even get me started on the Krastella.”

The human waved his hand dismissively. “I fail to see how they could get into any trouble, they’re the biggest pacifist in the universe.”

“Well that’s as maybe, however their war-fleet just laid waste to half the sector, after hearing something called Nu Metal.”

“Wait? They have a war-fleet?”

“But I once saw them have a year of mourning when one of them accidentally stepped on an ant.”

“But I’ve visited the statue they erected in its honor, it’s two hundred meters tall!”

“And now that statue is mounted on the nose of their flagship.”

The human scoffed. “Well, I have to say that I’m shocked that our music seems to have such a deleterious effect upon those who hear it.”

Greemax waved an appendage at the gathered delegates. “The council has assembled here to demand that you turn down your music and try to be responsible neighbors – or else we will have no choice but to evict you from the Galactic Council and blockade your planet.”

The human straightened up and nodded politely at Greemax. “Very well, I shall inform my superiors. I’m sure we’ll be able to come to some arrangement.”

Inwardly the human smiled. The experiment had been a success. Now the second stage of the assault could begin. Soon, they would know the real power of music. As he walked away he keyed his communication device. “Stage one complete. Begin stage two - fetch me Hugh Jackman and the entire cast of The Greatest Showman."